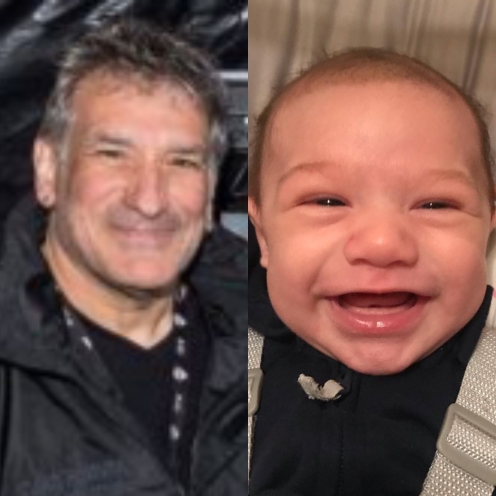 I know… it’s a long time since I posted on here. I won’t apologize and hope you, my dear reader, will understand. While I’m happy to report that my health is slowly improving and I remain cancer-free, other things were just too painful to put into words. Even now I hesitate but the story was started so should be brought to its conclusion.

The story I refer to involves my biological brother, Michael. As you may know, I’m adopted and, about 15 years ago, discovered that my birth mother had a son before me. In late January, through 23andMe, I found him. As it turned out, Michael had learned about me a few years earlier and looked for me since. On February 9th, we spoke for the first time. On February 10th, my son and daughter-in-law announced, by means of a delicious cake, that they were having a baby. It was “the best weekend ever”.

Michael and I spent many hours on the phone, catching each other up on our lives. We had lots in common and were instantly at ease as if we’d known each other all our lives. I’ll never forget his fiancé, Judy, saying over and over as we talked that first night (he had me on speakerphone) “Oh yeah, you two are definitely brother and sister”.  He became my “Big Bro” and I was his “Seester”.

We finally met in person before Michael left for a summer European tour with the band Iron Maiden (he was their audio engineer). We continued to talk and text and made plans to see each other in October; he was to meet my children. Growing up as an only child with no children of his own he was excited about being an uncle and finally seeing his niece, nephew and grand nephew. However, as suddenly as Michael entered my life, he departed. On August 13th, he returned to his home in Las Vegas. The next day we texted about how happy his dog, Chunk, was to see him again. Michael promised to call as soon as he felt more rested. Instead the call came from Judy to let me know he was gone… peacefully in his sleep. We recently learned it was a heart attack. I still can’t wrap my head around it… the universe gave me my brother then snatched him away with a boisterous “psych!!!” like an especially cruel bully.

Then, less than a month later, my grandson Samuel was born and I was smitten. Seeing my son hold his son easily goes down as one of the wondrous moments of my life. I only wish we lived closer. I don’t get to see Sammy as much as I’d love to so I appreciate the numerous photos and videos my son and daughter-in-law send or post on Instagram. I can watch the videos on a loop. Sammy’s such a happy baby and the sounds he makes are incredibly adorable. I have a stack of books that I plan to read to him via Skype… hopefully it develops into a weekly ritual, just for the two of us. We’re going to have so much fun.

I miss Michael terribly and not a day goes by when I don’t think of him. A celebration of his life was held on September 30th when I met more members of my biological family as well as some friends and colleagues. Cyndi Lauper sent a huge floral arrangement (he worked for her years ago) and Iron Maiden sent a banner from the tour. I was regaled with great stories. Even now, friends and family reach out to share more memories and pictures of Michael. He was so loved and well-respected that his passing was noted in an industry publication (although they got the date of his death incorrect).

I wish we had been given more time. I wish my children and Sammy could have met him but I am blessed to have found my amazing, kind, talented, smart, funny Big Bro.

Here’s to a 2019 that’s filled with love, happiness, good health and prosperity for all.