I’m late to the party but wanted to sit back and watch it unfold a bit before posting. Over the last week, there’s been a lot on the media over Adam Richman of Man vs Food fame as well as Man vs Food Nation, Amazing Eats and Adam Richman’s Best Sandwich in America. His newest show, Man Finds Food which was to debut on July 2nd, was pulled by the Travel Channel over recent posts on Instagram where he called one woman “a cunt” and told another to “grab a razor and draw a bath. I doubt anyone would miss you”, among other incredibly rude responses, when they tried to educate him regarding his use of the word “thinspiration”.

Rather than rehash the whole brouhaha, here’s the original blog that started it all: http://adiposeactivist.wordpress.com/2014/06/19/man-vs-food-vs-social-media

Travel Channel has remained mum on why the show was pulled. So, if one Googles “Adam Richman” and reads the news stories, blogs and comments that follow (lots of which are truly hateful so tread carefully), one might get the impression that they were hasty in their decision because, hey, everyone’s human and entitled to a slip-up. Plus he did issue an apology (if one wants to consider the following any kind of mea culpa):

“I’ve long since struggled with my body image and have worked very hard to achieve a healthy weight. Instead of responding to hurtful comments with compassion, I lashed out in anger. I’m not asking for sympathy, but rather understanding and forgiveness. I can say with certainty that I’m taking a deep look at myself and I’m incredibly sorry to everyone I’ve hurt.”

Can someone please explain what losing weight has to do with telling someone to commit suicide? Because I can’t make the connection, as hard as I try.

Here’s the thing, though… it’s only half of the story. What the news stories did not report, because they’re not aware of it, is that this was not Adam’s first vulgar go-around on social media (at least that I personally know of). Back in December, Adam went on a Twitter rant where he called a woman a “smart car sized biatch” then fired back on his Facebook page at a fan, who had recently lost his wife, with the following: 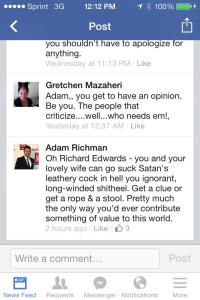 By the way, it was posted under Adam’s “apologetic” status:

I apologize to all who were upset by my vitriol about this vile person’s conduct. I can’t pretend not to be affected, regardless of my job

I also encouraged family and friends to write to Travel Channel, as I and a lot of people in the size/fat acceptance community did, and call their attention to Adam’s comments. Scripps Networks (parent company of Travel Channel) sent the following standard reply:

Thank you for taking the time to write to us. Our brands and sponsors do not control our on-air talents’ off-air conversations, however, we will be glad to pass your comments along to our executive team for review.

My guess is that they viewed the incident as a one-time faux pas and gave Adam the benefit of the doubt. Now, with all the attention Adam’s recent rant has garnered, they cannot deny that their talent has some anger management issues to resolve. I wish that they would share their knowledge with Walmart who, likely not aware of the entire story, is keeping Adam as a spokesperson. This is the same company that dropped Paula Deen like the proverbial hot potato when stories emerged about her racist comments from years ago. I, for one, will write to Walmart and encourage you to do the same. (https://corporate.walmart.com/contact-us/store-corporate-feedback)

So, in the end, pulling Adam’s show is not about fat vs skinny, “thinspiration” or Adam’s pride in his weight loss and the alleged jealousy over it. This is about a man who’s unable to control his temper on social media and lashes out with crude words and suggestions of suicide. He needs time to cool his heels and think about how words can hurt.

One thought on “Adam Richman: Man vs Words”