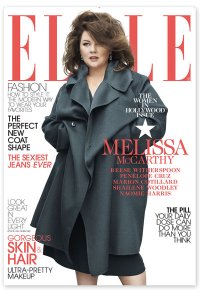 Over the last week or so, many have weighed in about Melissa McCarthy’s appearance on the cover of Elle’s November issue.  If I hadn’t already read that it was Melissa, I wouldn’t have recognized her under a voluminous trench coat, teased hair and slimmed down face (photo shopped for sure).  The consensus is that, while showcasing a lovely, fat woman, Elle is still reluctant show off a fat body.  After all, back in 2010, they cropped Gabourey Sidibe’s picture to show her only from the chest up (her skin was also lightened).  Regarding Melissa’s cover Elle commented,  “On all of our shoots, our stylists work with the stars to choose pieces they feel good in, and this is no different: Melissa loved this look.”

I’m sure Melissa did love the look.  Just because she’s famous, it doesn’t mean that she’s comfortable in her fat body as much as I’d love to think that she’s proud and confident.   In an interview with Good Housekeeping magazine, she confessed “Sometimes I wish I were just magically a size six and I never had to give [my weight] a single thought,” Despite daily tennis lessons and Pilates and being  “weirdly healthy” she added, “I don’t really know why I’m not thinner than I am.  I don’t really drink soda; I don’t have a sweet tooth, and we eat healthfully at home.”  Although she said, “It’s pretty damn good. I am right here at the moment and I’m OK with it.  I’ve got other things to think about”, it sounds more like resignation than acceptance.

When size acceptance activists were up in arms over Melissa’s arms having been covered up in Bridesmaids, while her co-stars went sleeveless, she said nothing about the alleged “fat shaming”.  While celebrities like Beyoncé and Jessica Simpson fight against being photo shopped, Melissa joked about the job done to slim her face and body in the UK poster for The Heat, blaming her husband, Ben Falcone.  “Ben did it, and we had a big fight about it because I said I wanted it 80 percent smaller and he said he wanted it 70 percent.”

Instead of chastising Elle for covering up Melissa’s gorgeous body, maybe we should hope that Melissa finally learns to accept and love it like we do.