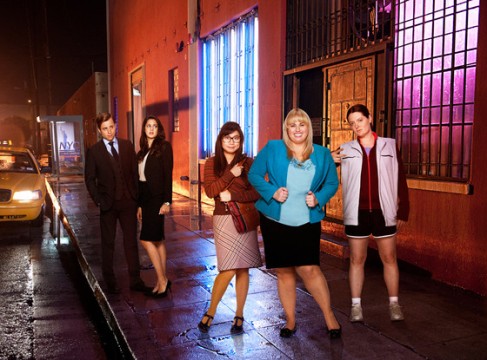 For those who are currently under a rock, Rebel Wilson, the Aussie actress who stole her scenes in “Bridesmaids” and “Pitch Perfect”… and yes, she’s fat… has a starring role in the heavily (no pun intended) promoted ABC show, “Super Fun Night”.

Rebel portrays Kimmie Boubier (pronounced BOOB-ee-yay.. get the joke?  Wink, wink, nudge, nudge.), a recently promoted lawyer.  She has a flirtatious friendship with Richard, the boss’s son and an adversary, Kendall (a beautiful, thin woman, naturally) who sees Kimmie as an obstacle in her pursuit of Richard and is pretty much a bitch for no reason except that she has to win at everything.  Kimmie’s awkward and klutzy with two equally awkward best friends, Marika and Helen-Alice.  As a result of her promotion, Kimmie and her friends decide to get out of their comfort zones and make Friday nights “Super Fun Nights”.

After viewing the first episode, I’m undecided.   Mostly, I’m thrilled that a fat woman is the main character, and possible romantic interest of an attractive, successful man who is also a very supportive friend, in a network show.  However, klutziness aside, I wish Rebel would stop with the self deprecating humor.  Bringing up boob sweat… really?!  Let’s not forget the last seconds of the show with her struggling to get into Spanx.  Yeah that’s stuff we big women deal with (boob sweat can be controlled with antiperspirant, by the way) but putting it out there as comedy fodder only makes it OK for others to poke fun at the fat.  And running like a maniac because there’s jelly donuts in the conference room… ugh.   I’m surprised the next scene wasn’t of Kimmie talking through a mouthful of donuts with powdered sugar on her black jacket.

Speaking of the jacket.. what the hell was that?  While the galaxy print dress Kimmie wore to the piano bar looked great on her, the jacket she had on when meeting Kendall for the first time looked like the top half of a velour track suit.  There are much better clothing options for a lawyer… unless the idea was to make fat Kimmie look sloppy next to meticulously groomed, thin Kendall.

I’m not giving up on this show yet and will watch more episodes to see where it leads.  Maybe “Super Fun Night” will be fun after all (keeping my fat fingers crossed).