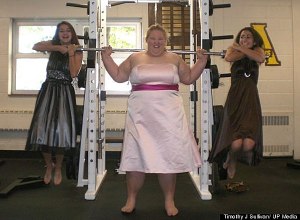 Today I read the disappointing news that weight lifter, Holley Mangold (who competed with a torn tendon and finished 10th in the 2012 Olympics) will be on the new season of NBC’s “Biggest Loser”. A big (no pun intended) proponent of loving yourself at any size, Holley’s been an inspiration. “I love my body,” she said. “I think it’s perfect. I think being strong and confident and doing what you love makes you more feminine because you are not afraid to be yourself.”

I doubt her participation on the show is about bettering her health. How many unhealthy people do you know who have competed in no less than 10 sports including soccer, swimming, football and track and field? My opinion (and, of course, I could be wrong) is that it’s about raising the money to train and get to the 2016 Olympics. After all, sponsors don’t throw their money behind such unglamorous sports like weight lifting (all that grunting, grimacing and sweating, not to mention big bodies) when headlines and ratings are made by petite gymnasts and rippled swimmers. Having said that, it’s her body and her decision to do with it as she pleases. No one has the right to tell her what to do with her body whether it’s lift weights, lose weight or gain even more weight.

What’s disappointing and distressing is that she agreed to do this on “Biggest Loser”, the show that makes it OK to bully, endanger and humiliate fat people and turn them into sobbing, self-hating pieces of “sub-human” flesh. If that sounds like an exaggeration, check out the following from an interview with finalist Kai Hibbard (courtesy of BodyLoveWellness.com).

“You get poked and prodded by complete strangers and nobody will tell you a single thing about what’s going on. And that point was where I really believe that the dehumanization process started, where they start teaching you that because you are overweight you are sub-human and you just start to believe it. Through the whole process, they just keep telling you, over and over, how lucky you are to be there. You’re being yelled at by people [whose] job is basically to keep the ‘fat people’ in line and you start to believe it.”

“We were working out anywhere between 2 and 5 hours a day, and we were working out severely injured. There’s absolutely no reason to work a 270 pound girl out so hard that she pukes the first time you bring in a gym. That was entirely for good tv.”

“There was a registered dietician that was supposed to be helping [the contestants at the ranch] as well . . . but every time she tried to give us advice . . . the crew or production would step in and tell us that we were not to listen to anybody except our trainers.”

“I didn’t learn how to dehydrate until I got on the ranch. It was every week. Every single week, this is what a weigh-in would look like: the real weigh-ins were at 10 o’clock in the morning and they were on a cattle scale at the ranch and they weren’t filmed. . . . Now, mind you, it was shot in Simi Valley, so it’s a desert, so it’s hot. And on the morning of the weigh-in you would get up and you’d put on your underwear, your spandex shorts, and you’d put on sweatpants and then you’d put on a sports bra, a tank top, a long sleeve shirt, and your sweatshirt, a ball cap, and then you’d zip up your sweatshirt, you’d put your hood on and you’d go down to the gym. [The gym] wasn’t a real gym, it was a temporary structure just for shooting and it didn’t have any air conditioning and you’d shut all the doors and all the windows in the gym. Then you would work out for two, two and half hours (as long as you could stand it) without any water. Most, if not everybody, had cut their water about 24 hours beforehand, if not 24 hours then at least by 5 o’clock the afternoon before. And then, you would drink coffee if you had anything the night before, because (a) it would clean your system out and (b) it would dehydrate you. So after you did the 2 hours of working out in full sweat, sweating off as much as you can, you would go back to the house, shower, blow dry your hair, and strip down to the lightest clothing you could find, which was usually spandex shorts and a sports bra. Then you’d go downstairs and you’d weigh yourself in and the second you got off that scale you would chug water because you were so dehydrated.”

“So I got to a point where I was only eating about 1,000 calories a day and I was working out between 5 and 8 hours a day. . . . And my hair started to fall out. I was covered in bruises. I had dark circles under my eyes. Not to get too completely graphic, but my period stopped altogether and I was only sleeping 3 hours a night. I tried to tell the T.V. show about it and I was told, ‘save it for the camera.’”

I fail to see how this is a good way to show young girls that you can and should love yourself regardless of your size/weight. I also can’t see how Holley agrees that this is a safe, effective way to attain her goal. Whatever the results, I do hope Holley makes it to Rio de Janiero with her confidence, good humor and self esteem intact… and leaves with gold.