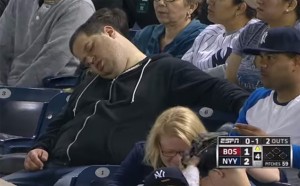 Poor Andrew Robert Rector. He got busted on camera taking a snooze during a New York Yankees game against the Boston Red Sox back in April. He’s not the first person who’s slept at a ballgame nor will he be the last. I confess to having dozed off at the stadium once or twice. Hey, between the hot afternoon sun and a couple of beers, it’s easy to close my eyes and drift away.

However, Mr Rector claims it was much more than that. He’s suing Major League Baseball Advanced Media, ESPN New York, the New York Yankees, as well as ESPN announcers, Dan Shulman and John Kruk and wants $10 million in damages for “defamation and intentional infliction of emotional distress”.

According to Courthouse News, the announcers “unleashed avalanche of disparaging words against the person of and concerning the plaintiff. These words, include but not limited to ‘stupor, fatty, unintelligent, stupid’ knowing and intending the same to be heard and listened to by millions of people all over the world …”

During their on-air banter, they apparently made the following “false, defamatory statements”:

Those are some truly awful things to say about a person. Except that, in this video, Dan Shulman and John Kruk say none of it.

The worst of it, in my opinion, was when they joked about the “buddy” not wanting to share his chicken fingers and they may very well have still said it if Rector were slender. Otherwise nothing could be interpreted as fat shaming or referring to him as “stupid”. What the announcers are more guilty of is not asking stadium security to check on Rector and make sure he was indeed napping and not passed out or otherwise ill. He certainly didn’t look comfortable.

When one attends a game at Yankee Stadium, there are terms and conditions that are automatically agreed to as a ticket holder… one of which is:

The Yankees, the participating club, the commissioner of Major League Baseball and the other event promoter and each of their respective agents and licensees shall have the unrestricted right and license to use the holders likeness in any broadcast, telecast, film, audio/video recording or photograph taken in connection with the game or other event or other transmission or reproduction, in whole or in part, of the game or other event.

Yes, people have been subjected to on-air or online ridicule over their size, whether thin or fat, and it should never be tolerated. However, unless another video surfaces to prove Rector’s allegations, I have to believe that this is a case of “the boy who cried wolf” or “the man who cried fat shaming”, looking for a pay day because he got caught napping. True, it’s embarrassing but hardly worth a $10 million settlement or even $10.