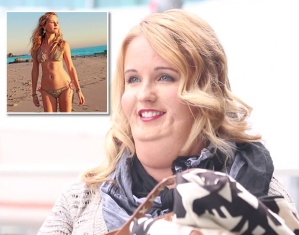 Yesterday, the creators of a site called Simple Pickup posted a video of what they called a “social experiment” involving men who use the dating app, Tinder. The app allows a maximum of 500 characters for users to describe themselves to potential suitors thus the focus is on photos and appearance. If you find a person attractive and the feeling is mutual you progress from there to meeting in person.

Five dates were arranged with Sara who, with makeup and a rubber suit, was transformed from the slender woman seen in her profile pictures to a fat one. The first 4 men were not happy and said as much. On the fifth date, Sara confessed to the trickery but it’s not clear how much time this date lasted before she admitted to not actually being fat. For all we know, he could have been on the verge of hightailing it out of there too. Check out the video for yourself:

Several years ago when I was dating, I met someone who said he was in his mid-40’s and whose profile included several pictures of a robust, middle-aged man. Not only was he much thinner than in his photos (which was OK although I prefer fat men), he was also about 15 years older (not OK). I went through with the date because I didn’t want to embarrass him in a public place (we met at a diner and I insisted on going dutch) and we shook hands goodbye. However the following day, when he IM’d to ask for a second date, I politely said I didn’t think we had enough in common to pursue a romantic relationship. He called me shallow, saying he knew it was because he didn’t look like his pictures. Since he brought up the subject, I called him dishonest and said there was no way I could trust someone who wasn’t what he claimed to be. His reply was to send a picture of (allegedly) his large penis. It was supposed to be an incentive but did absolutely nothing to endear him to me.

Was I shallow? I don’t think so. Being deceitful from the get-go is not the way to begin any kind of relationship. Should I have said something when we met? He seemed nice on the phone but who knew what face-to-face rejection would make him do? I didn’t want to jeopardize my safety. His response on instant messenger to my declining a second date certainly wasn’t what a reasonable person would do so I’m sure I made the right call.

To be fair, Simple Pickup did another experiment to see how women would react to Willy who, also with makeup and prosthetics, appeared fatter than his Tinder profile showed him to be. The women were not as dismissive although they questioned how old his profile pictures were. Of the five women, four made plans for a second date even one who seemed reluctant to put her arms around Willy when he hugged her. Check out the video below.

I could be wrong and please feel free to express your opinion (respectfully, of course) but I don’t believe all of the women who agreed to second dates would have actually gone through with them. I believe they made the best of the situation as I did and would have come up with an excuse later or waited until they were safely home to express their anger and/or disappointment with Willy’s deception (the video didn’t show whether he confessed to the farce). Then again, they may not have had steadfast preferences when it comes to men’s body size like the one who said she loves “all men”. Some may have even thought that, with diet and exercise, Willy had potential to lose weight. After all, one date did suggest going to a farmer’s market which would involve walking and access to fresh fruits and vegetables.