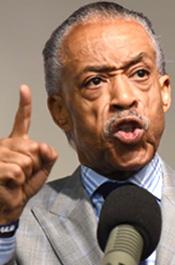 Rev Al Sharpton, Baptist minister as well as a civil rights and social activist, has been in the news recently due to the murders of unarmed black men, and resulting racial tensions, in New York City and Ferguson, MO. But that’s not what this post is about.

This post is because of an article from The Smoking Gun about how the reverend enjoys making fun of fat people.
http://thesmokinggun.com/documents/celebrity/al-sharpton-and-obese-people-897531

Here are excerpts of Sharpton’s remarks during addresses at the Harlem headquarters of the National Action Network, a Christian activist organization which he heads:

“Sharpton recalled running into a former classmate from Brooklyn’s Samuel J. Tilden High School… The woman… ‘was slim, trim, the finest girl in Tilden.’ Now, however, ‘she obese,’ (said) Sharpton. ‘Every fine girl is two big Whoppers away from being obese.'”

“On the day before Easter, Sharpton mocked women anticipating a candy score the following day. ‘As old as you are… you overweight, obese, got diabetes looking for some corn candy and jelly beans.’ He added, ‘Talk about the resurrection, you gettin’ ready to have a crucifixion if you eat them jelly beans.'”

“Chiding a portly aide during remarks in late-April, Sharpton said, ‘I know how to make you jog. All I got to do is just put a fried chicken sandwich right here.’ As he said this, Sharpton mimicked holding the sandwich on a stick as a lure. ‘And you’ll run as far as I got that chicken sandwich.'”

“Sharpton recalled once ridiculing a female diner who ate across from him at Sylvia’s, the Harlem soul food restaurant. After watching the woman devour half a fried chicken, two sides, and dessert, Sharpton recalled, ‘I just got mad.’ When the waitress asked if she wanted anything else, the woman ‘had the nerve” to ask for a cup of coffee with Sweet’n Low. So I couldn’t take it anymore and said, Miss, lemme ask you something. All of that you took, what do you need Sweet’n Low? I mean, you just make yourself feel better? You might as well pour the whole bag of sugar in the cup.’ (Later) Sharpton reminded the audience to attend a panel that afternoon, saying that attendees ‘don’t need to eat lunch. Swallow hard and stay right here. You too fat anyhow, you don’t need no nothing.'”

Coming from Al Sharpton, such remarks are the ultimate in hypocrisy. First of all, not that long ago, he was fat and the subject of jokes, body shaming and food policing. In the space of 2 years Sharpton lost over 100 pounds and apparently the memory of how such jokes, remarks and comments are hateful and hurtful. In fact he boasts about regularly and purposely insulting fat people: “Since I lost weight I talk about fat folk real bad. I like keeping fat folk around me so I can just talk about them.”

Secondly, the man is not only a civil rights activist but a Christian minister. How can he ask his congregation to “love your neighbor as yourself” while he publicly mocks and belittles others? Can someone explain how that fits into the definition of love? How do the members of his congregation or National Action Network feel about being kept around to be the butt of his jokes? If I attended a place of worship whose minister degraded any class of people, I’d find another place to worship. Jesus may have lobbed insults at the Pharisees but it was about their actions, not the way they looked.

And are civil and social rights OK for some but not for others? Sharpton rallies against racism but is also guilty of negatively judging people by their appearance. He’s not psychic yet assumes that fat people are diabetic, gluttonous and so lazy that the only way to get them moving is to treat them like horses with a sandwich on a stick instead of a carrot. He wants to shame fatties into changing our appearance and the way we eat instead of recognizing that people come in a variety of shapes and sizes and that everyone has the right to live without shame, fear or judgement. How is that so different from someone who makes assumptions based on the color of a person’s skin? Please don’t give me that old “people can’t change the color of their skin but fat people can lose weight, blah, blah, blah” because it has nothing to do with the point I’m making.

Fat activist Stef Maruch wrote “Being proud of weight loss is being proud that you have sufficient privilege to move from the oppressed to the oppressor category.” From his comments, I have to say that Rev Al Sharpton has become an oppressor… a bigoted, prejudiced, bullying, hypocritical oppressor.