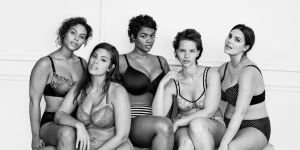 There’s been some recent news regarding models, particularly about their sizes.

Last week, France passed a bill to ban “ultra-thin” models in the fashion industry. Any agency using a model whose BMI (Body Mass Index) is less than 18 will face exorbitant fines and/or jail time of up to 6 months. The purpose is to curb eating disorders among models, some of whom have admitted to starving themselves to attain their small sizes. Model Isabelle Caro, who died in 2010, said that she once ate just 1 square of chocolate daily with a cup of tea. The bill also hopes to help those who want to emulate the models… currently there are almost 40,000 people in France who have been diagnosed with anorexia and the majority of them are teens.

While I understand the well-meaning intentions behind the bill, I also find it disconcerting because it relies on the very unreliable BMI as an indicator of health. There are other symptoms… hair loss, constant fatigue, brittle nails, damaged teeth… that would indicate disordered eating. Models who are naturally very slender would be unable to find work and might resort to unhealthy means of gaining weight.

Earlier this week Lane Bryant’s launched the #ImNoAngel ad campaign for their Cacique line of bras and panties. With a not-so-subtle dig at Victoria’s Secret’s Angels and the Perfect Body campaign with their slender models, Lane Bryant features plus size models Ashley Graham, Marquita Pring, Candice Huffine, Victoria Lee, Justine Legault and Elly Mayday. The message is that big is sexy too…. except that their bodies are similar in size, which (let’s face it) isn’t all that big. There are no big bellies, hips or derrieres and nary a stretch mark to be seen.

Although the media is lauding the campaign’s “body diversity”, the fact is that Lane Bryant, as well as other plus size clothing designers, could use more diversity. Their clothes go up to size 28 and their bras go up to size 50DDD with some cup sizes going up to H but you wouldn’t be able to tell that from the ads or models on the website.

Also, I am not fond of yet another implication that being fat is beautiful and sexy so long as one’s not too fat. We women with big stomachs and butts, less-than-perky boobs, large arms, stretchmarks, etc are gorgeous and sexy too and should be represented. The fashion industry needs diverse bodies from very slender to very fat to show that all bodies are good and beautiful. Maybe, then, countries like France wouldn’t have to pass bills to keep women from starving themselves. And I wouldn’t have to post a bathroom selfie in a Lane Bryant Cacique bra. 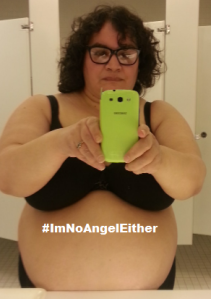 One thought on “No angels there… or here”