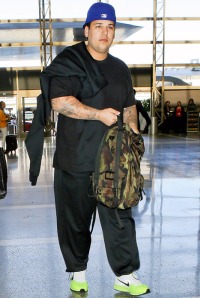 I’m not a fan of the Kardashian/Jenner clan and tried to avoid this past weekend’s hoopla about the Kim/Kanye nuptials. However I read something yesterday that, if true, is quite sad. Apparently Kim’s younger brother, Rob, skipped out on the wedding because he was embarrassed about his weight:

“He wanted to be there, but he was feeling so insecure and didn’t want anyone to see him heavier like this,” a source said.
Meanwhile, sources told TMZ that Rob has “become so insecure and depressed about his appearance, he refused to be in the family wedding pics.”

How terrible is that… missing your sister’s wedding (albeit her third one) because you’re ashamed of your appearance? What’s worse is that he probably would have attended if it hadn’t been for all the hatred spewed online after pictures of him surfaced earlier in the week, prompting him to lash out:

Rob’s not the only public personality who’s been bashed for not looking like what society deems “acceptable”. Being famous doesn’t make a person immune from cruel taunts; just ask Adele, Gabourey Sidibe, Melissa McCarthy, Gov. Chris Christie, Tyra Banks, Jessica Simpson, even the newlywed Kim to name a few. And let’s not forget celebrities like Fiona Apple, Angelina Jolie and another Kardashian, Kendall, who have been criticized for being “too thin”.

But here’s the question I wish there was an answer to… why is there so much hatred toward different bodies? Hardly a day goes by when I don’t read a story about the difficulties a person faces over his/her weight or how governments wage “war against obesity” because of how people look. C’mon, if it were truly about “health” then why is their criteria based on weight and BMI instead of fitness levels and other health indicators?

This past week, in addition to the stories of Rob’s weight (not to mention Kim’s “wedding diet” because heaven forbid she were to have a tummy after giving birth), there were articles and blogs about tennis player Taylor Townsend who, 2 years ago, had been denied funding by the US Tennis Association because of her weight. Without succumbing to the pressure to slim down, she had “an amazing week” at the French Open. Also, Instagram publicly apologized to singer/blogger Meghan Tonjes for removing a photo she’d posted of her ample derriere clad in a bikini brief, saying that it violated the site’s nudity rules while leaving up similar photos of slender women, some in thongs or showing more skin than Meghan did.

And that’s just what was in the news. A fat person’s picture can’t be posted without insulting comments popping up or the inevitable armchair “medical experts” making judgement calls about his/her health when it’s impossible to gauge one’s health simply by looking at them. Recently, there was a Kickstarter to fund a film called “Fattitude – A Body Positive Documentary” about “how popular culture fosters fat prejudice and then offers an alternative way of thinking”. The film maker, Lindsey Averill, endured a barrage of hatred starting with a troll who posted a YouTube video splicing her trailer with violent, racist images then posted her address and phone number on multiple sites encouraging others to harass her for daring to suggest that there’s nothing wrong with being fat. People called with rape and death threats, sent pizzas, Bibles and Qurans to her home and harassed her husband at work. They also posted the names and addresses of people who were interviewed for the trailer and threatened to do the same to those who pledged money for the film. Despite it all, the film was fully funded and I’m proud to say that I’m one of its backers.

But the question remains: Why such hatred? Why are fat acceptance bloggers and activists the recipients of emails telling them to commit suicide? Why do some feel it’s OK to moo and oink at a fat person on the street or go out of their way to otherwise insult and shame him/her? Why are thin people told that they look “sickly” or “anorexic” and advised to “eat a sandwich”? Why can’t we all just accept that human beings come in a variety of shapes, sizes, weights and health statuses and that every one deserves respect? No one is saying that you have to be attracted to a fat person or a thin person. Hey, I’m not attracted to men with muscles and 6-pack abs but I don’t hate them and sure as hell don’t go on body building sites and forums to make rude remarks. I guess it’s a question that won’t be answered any time soon. But I’m fighting for the day when it won’t ever have to be asked.