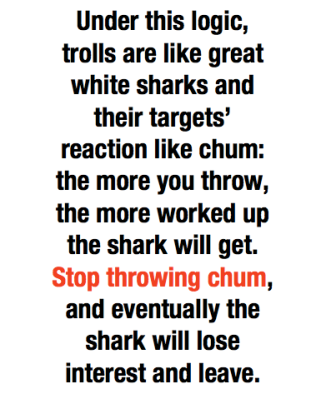 As some of you know, I’ve had this blog for a few years. Apparently it’s been under the radar because I’ve had no negative comments… unless you count the “but being fat is unhealthy!” responses.  I don’t because they’ve been sincere and respectful even though my health is no one’s business except mine and my doctor’s.

That’s not been the case with the Facebook and Instagram pages which I recently opened for my blog. On one hand, I guess I can say that my fat acceptance/body positive activism is finally getting more attention. On the other hand, some of the comments are truly rude… except for the one guy who compared my middle finger to an eclair. Eclairs are fucking delicious. I should have left that comment up because it might have been a compliment… lol.

I’m grateful for the delete and block options because I won’t engage the negativity. I will occasionally participate in debates on other fat acceptance/body positive pages but when it comes to mine, I refuse to expend one iota of energy or sanity. Such folks are hell-bent on insulting fat people and get their kicks in getting a rise out of us. No amount of education or inspiration will change their direction. So why should I take their bait and aggravate myself for their satisfaction?

Other bloggers/activists will address negative comments and provide stats, quotes and all sorts of information. More power to them and I sincerely hope they succeed in convincing at least one person that fat people are deserving of respect, that beautiful bodies come in all shapes/sizes and that if you can’t say something nice, it’s best to say nothing.

As for me, I won’t feed the trolls.