It’s Thanksgiving and here I am…. at home, makeup free and in my comfy sweatpants and t-shirt, almost recovered from a bout with the flu. The turkey and sides were delicious, leftovers are put away and dishes are done (thanks, Ken!!). Now, while I write, I’m watching/listening to Barbra Streisand’s concert film on Netflix.

It’s not how we planned to spend the day. Ken and I hoped to be in Pennsylvania with my children, their spouses and other family members. It’s appropriate though, considering that some of this past year didn’t go as planned either.

To recap: After months of feeling tired all the time and generally not like myself, I was diagnosed with thyroid cancer which I briefly wrote about here. In late September, I underwent a total thyroidectomy and returned to work in mid-October after being wonderfully cared for and fussed over by Ken and my kids. I did manage to watch every  episode of Game of Thrones and eagerly await the final season. 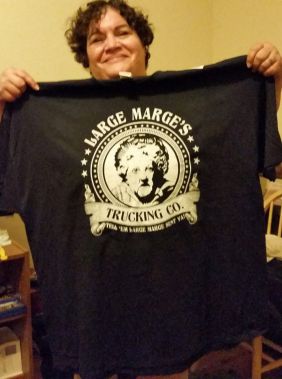 However my recovery isn’t what I expected. I may have suffered damage to my vocal cord nerves but won’t know for another few months. My voice… which prompted many to ask if I ever considered work as a phone sex operator (I kid you not)… is now harsh and scratchy. To my ears, it sounds like Large Marge from the movie Pee Wee’s Big Adventure (a guilty pleasure). To make light of it, I got myself that shirt >>>>>

What I won’t make light of is the fact that I now cannot sing. Not that I do it professionally but singing is something that brought me so much joy and I did it rather well. Right now Barbra is singing one of my favorites, Evergreen, and I can’t sing along. What comes out is a horribly out-of-tune croak.

I know things could be much worse (as many well-meaning family and friends remind me). Believe me, I am very grateful they’re not. But, dammit, I LOVE to sing. If time proves the damage is irreversible I will mourn the loss of that life-long pleasure as deeply as some women mourn the loss of their breast(s) after a mastectomy.

Something else I didn’t expect is the exhaustion that comes with not getting enough of the levothyroxine which replaces the hormones my former thyroid was producing. After looking at recent blood test results and questioning whether I was even taking it as prescribed (I was) my endocrinologist just increased the dosage by 50%. And it still may not be enough. The process of getting the dosage just right may take up to a year. I thought I was tired before the surgery but there are times when putting one foot in front of the other feels like a herculean effort and I need to stop for a few moments.

For this holiday season I decided the best gift to myself is to not stress over things that can’t get done. If my body says “rest”, I will rest. And if my still-recovering, low-immunity body contracted the flu which prompted the cancellation of plans Ken and I made to celebrate our birthdays which are 2 days apart… ah, well. I may have turned 55 only once in my life but I’m also determined to turn 56… and 57, etc and onwards.

I also didn’t anticipate the number of women who commiserate with their own stories of thyroid troubles and I am grateful for their efforts to help me feel better about my situation. However, some remind me of mothers who terrify pregnant women with stories about their horrible experiences with labor and childbirth. Like the ones who tell me “I know EXACTLY what you’re going through” and, when I reply with “Oh, I’m sorry you had cancer too”, say “No but I have/had ISSUES with my thyroid…”. Um, NO, you don’t know exactly what I’m going though.

Years ago, I had a hysterectomy because of fibroids and extreme menstrual bleeding but would never, ever compare myself to someone with uterine cancer. While “of all the cancers you can get, thyroid cancer is one of the best”, it’s still CANCER… a growth of abnormal cells, like an alien that invaded my body. Hearing that word does something to you that I’m sure is not the same as hearing that your thyroid is either working too slow or too fast. Again, I’m immensely grateful things are not worse but can we agree that it’s not the same ballpark? It’s not even the same game. It’s more like rugby vs football. Or baseball vs cricket.

Next week I will undergo a full-body scan to determine whether there’s any thyroid tissue left (if so, then I’ll need radioactive iodine treatment) and that cancer hasn’t popped up anywhere else. I’m confident the news will be good. And, if for any reason, it’s not so good… I’ll get that shit handled too.

Thanks so much for your support!! If you’re on your own journey towards self acceptance and body love, please follow my Facebook and Instagram pages for affirmations, inspiration, information and fashion.

4 thoughts on “Not How I Planned”